So many may ask, even if you didn't ask, I would love to share! Hehe. Why 12th April 2014? Its actually a simple answer to it. But lets just beat around the bushes abit. Hehehe. 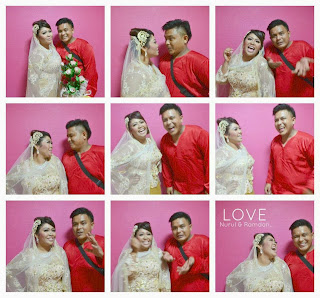 We got engaged on the 5th of May 2012. Why this date? Also got another story to tell! I am like one makcik kaypoh who loves to tell stories!
We initially planned to get engaged on August/September if I am not wrong, after a week or two after Hari Raya that particular year. My parents are cool with it, and most of the plannings of dates were mutually agreed by both sides.
But when his mother went over to his uncle's place to appoint him to be 'tukang cakap' for his family, he asked, " Why do it after Hari Raya? Why not May, since there is a public holiday?" Hahaha! Yes, a big leap from September to May. Instant response from me, " You crazy ah, how to find money like that! How this and that." We both decided to engaged also like what malays called it, "terjun botol."
We also kept it away from our close friends. Whatsmore strangers, right! Till the day we went to Bali on April, yes a month before, then we made an official announcement! Yes, we were tight on budget too since we planned to go to Bali on April. But then after discussing it with both sides, we agreed!
I tell you, when his family came over to my place to 'merisik' my heart was beating so fast, even though both of us were not there to witness it! So yes, with God's will we got engaged on the 5th Of May 2012. Alhamdulillah. 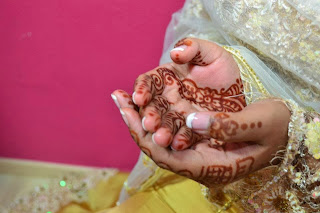 We decided to be tied with each other for two years, as agreed by both our family. We have not fixed a wedding date till I think, 3-4 months to our engagement period. My dad initiated to make it on the mentioned date as it is my king's birthday! He sanggup see his calendar, back then when it was 20 plus months away. Haha! He wants to 'give away' her precious princess during his birthday. And just so you know my boy's birthday is on the 15th April, near to my fathers'. So that's how we get to our wedding date since his family too, agrees on it!
My boy shocked me once when he said his parents wants it to be in December 2013. From the start I told him I don't want our wedding to be during "peak months" like December, June and during any long public holiday. Even though like any other bride to be, I also want to have my wedding during my birthday since mine falls on December. Like these certain months, confirm chop many weddings, since its like the school holidays. I am not one who wants to rush to marry, but who doesn't want to, right?
But I cant probably be unrealistic, and follow what I want. I think, our wedding is just nice since it be only a month earlier from our two years of engagement anniversary. Since the boy and myself fell in love quite fast, and decide to take a leap to apply for home, then get engaged and now getting married, to know each other better during the two years. Indeed it does help getting engaged to familiarise with your future spouse habits and know his family better.
So, that is how we finally decided on getting hitch on 12th April 2014. So lucky for him to be getting married near his birthday, thus the rest of his birthdays will also be our wedding anniversary. Pfft, so jealous! Insya'allah all of our plans will go as well as we predicted!
I cant wait to marry my best friend!
Posted by NuyulAishah Parker at 09:32

Nuyul Aishah.
I have always chose to believe I am sweet seventeen.
Another blog of a BTB.